The Players Centre is embarking on a plan to improve its programs, enhance its reputation for artistic innovation and broaden its inclusiveness in performing arts.

Embracing the entrepreneurial spirit that has taken hold of Sarasota, The Players Centre will be relocating to the new Waterside Place development of Lakewood Ranch in Sarasota County. A new performing arts campus will be constructed on 4.5 acres in the center of the development.

The Players Centre will feature a 480-seat main stage auditorium with balcony seating, a 125-seat black box theatre, a 100-seat cabaret theatre with dining, and the main campus of The Arnold Simonsen Players Studio, which is the education arm of the organization. In order to maintain a downtown Sarasota presence, a satellite studio location will continue to operate in Rosemary Square.

What’s the history and legacy of The Players Centre for Performing Arts?

The Players Centre for Performing Arts was formed in 1929 and began as a community theatre with a series of one-act plays in 1930 when Sarasota had a population of just 8,000 residents. The area has since grown to be called the “Cultural Coast” of Florida – directly linked to The Players Centre’s commitment to being the community’s creative anchor for performing arts. For 92 consecutive years as the area’s longest-running performing arts organization, The Players Centre remains consistent with its “artistic voice” by providing expressive and entertaining theatre performances to thousands of visitors attracted to the region yearly.

The Players Centre has an extensive history impacting the lives of small children to high schoolers, Broadway creatives to local artists, designers, directors and countless volunteers through its shows, classes and workshops. Now the theatre looks to shine the spotlight on Lakewood Ranch, and create a stage that again benefits an entire community.

Why move The Players Centre location to Lakewood Ranch?

Location plays a pivotal factor in the move to Lakewood Ranch. A constant competition for attendance occurs in Sarasota, with four additional theatre organizations operating within ten blocks of the former theatre. The Players Centre conducted a study, evaluating the past five years of attendance based on area patrons’ zip codes, to determine the most convenient location to further foster the arts while seizing opportunities based on the region’s growth.

According to the study, more than 45% of ticket sales were from attendees located in Whitfield, central and east Sarasota while 28.5% stemmed from the I-75 corridor lining Lakewood Ranch to south Sarasota. Waterside Place at Lakewood Ranch provides a central location just minutes from those demographics – and The Players Centre will be the sole performing arts organization east of I-75.

What was wrong with the location in Downtown Sarasota?

The former theatre, located at 838 N. Tamiami Trail, opened in 1974 and was in desperate need of renovation and repairs costing many millions of dollars. The lack of convenient parking was a rising issue because of Downtown Sarasota’s explosive growth leaving most patrons searching for street spaces or crossing many lanes of traffic from area parking lots. The building and 1.77-acre property were sold for $9.5 million in 2018.

Following the sale, the buyer agreed to a two-year lease for The Players Centre to utilize the space for further productions until the completion of its new facility. The organization negotiated to remain at the theatre until May 2021 to finish its 91st season, but COVID-19 prompted shutdowns of theatres nationwide.

What amenities are incorporated in the new facility?

The Players Centre’s plans in Waterside Place at Lakewood Ranch intentionally stage the future for performance arts across the region. The property will become the main campus for The Players Centre and includes a flexible, multi-use facility featuring:

The facility, while offering programs for professional and non-professional performers, will also be available to other community organizations for speaking engagements, receptions, parties and more. The space also provides The Players Centre with potential opportunities for fostering inclusiveness, such as inviting other arts organizations to join the development with access to share office areas included, allotted time on the performance calendar and additional services. Regular use of the lawn is likely for various movie projections, outdoor gatherings and small performances.

What does The Players Centre offer the community?

The Players Centre’s arrival in Lakewood Ranch isn’t only about providing an avenue for arts east of I-75. It’s a community effort, in which everyone from business leaders to families, have a stake in building the culture of this highly desirable region.

The new building is not a standalone facility set apart from Lakewood Ranch – it’s part of the area’s fabric where residents can invest in performing arts programs and arts education that cultivate a society fostering creativity and civility. The Players Centre plans to provide:

Who is impacted by The Players Centre’s programs?

The Players Centre expects to impact more than 200,000 regional and local visitors yearly through spectacular performances at its new facility. Children and students of all ages across the region are enriched socially and academically via various classes, workshops, shows and additional programs.

An immense benefit to the community, The Players Centre helps creatively empower future generations. The theatre also provides programs and shows for local seniors as well. The Players Centre’s regional reach grows exponentially as the organization moves into a larger-capacity facility.

How are the funds generated to break ground in Waterside Place at Lakewood Ranch?

The Center Stage Capital Campaign is the fundraising driver for construction of the organization’s new, state-of-the-art facility in Lakewood Ranch. The Players Centre will raise $26.5 million for the project.

A significant portion of the $9.5 million, generated from the sale of the old theatre, was set aside to carry on The Players Centre’s impactful programs through purchasing a 10,000-square-foot shop building, continue vital operations through the COVID-19 pandemic, strengthen its fundraising campaign and more. The Community Foundation of Sarasota County’s Muriel O’Neil Fund for the Performing Arts donated a lead gift of $1 million for campaign.

What’s the timeline for land development?

The Players Centre will break ground on its new facility in Waterside Place at Lakewood Ranch by June 2023. Fundraising and community engagement, which is ongoing, will continue well past the community theatre’s groundbreaking.

Construction of the facility, developed and implemented by Westlake Reed Leskosky, SchenkelSchultz Architecture, and Willis Smith Construction is projected to stretch approximately 20 months.

Why was a land parcel in Waterside Place picked as the ideal place for an arts organization?

Lakewood Ranch is a community experiencing explosive growth and popularity. According to a mid-year survey in 2020 by Robert Charles Lesser & Co. (RCLCO), a national real estate consulting firm, it was the best-selling multi-generational area nationwide.

Waterside Place, like Lakewood Ranch overall, is developing into a premier area to live, work and play regionally. The community offers the necessary space The Players Centre needs to grow and will be within walking distance of more than 115,000-square feet of free-standing fine dining, shopping, wellness centers and additional entertainment amenities. The organization strongly feels that these components incorporated into Waterside Place play an integral role in attracting more visitors to The Players Centre.

Lack of parking became an issue at the old theatre. How will that improve in the new development?

Waterside Place at Lakewood Ranch, while a rapidly growing area to live, work and play, offers a convenient drive to attend high-quality performances, moving workshops and impactful classes. The Players Centre’s Waterside Place facility fixes the former problem by incorporating hundreds of parking spaces immediately adjacent to the theatre that will provide a hassle-free experience for attendees.

While a new facility is under construction, where will workshops, shows and classes be held?

The Players Centre announced on May 6 the acquisition of a venue at The Crossings at Siesta Key, located at 3501 S. Tamiami Trail. The new home for The Players’ indoor performances, dubbed “1130,” is a welcomed addition to a popular area of Sarasota and is conveniently located near the main entrance with plenty of parking options – previously an issue at its old theatre. The Players Centre’s newest venue totals 5,400-square feet to accommodate a stage, 152 audience members, backstage amenities and will facilitate the theatre’s 92nd Season set to be announced in July.

The Players Centre vacated its old theatre on U.S. 41 in October 2020 and relocated staff offices to The Players Studio at 1400 Blvd. of the Arts. All classes and workshops within the Players Centre’s education arm, which was established in 1995, take place at the studio. Those programs cater to more than 300 students ages 3 to 103 annually.

During the pandemic, The Players Centre’s shows were performed outdoors at the Sarasota Polo Club, The Bazaar on Apricot & Lime, Jiggs Landing Outpost and Marie Selby Botanical Gardens.

What economic impact will a performing arts hub have in Lakewood Ranch?

How can I get involved with fundraising or volunteering?

To learn more about how to get involved by clicking here. 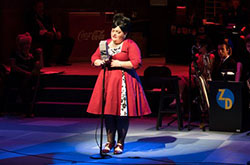 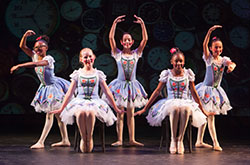 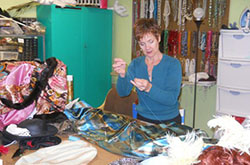